What Is Fascism? Has It Bloomed in the U.S.? 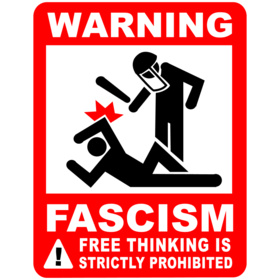 Over the past few days, James Fallows has been musing about “the challenge of calling the Trump era by its proper name.”  He is especially wrestling with whether “fascism” is the proper term as, he notes, Dutch writer Rob Riemen argues in his new book To Fight Against This Age.

Yesterday, in a post that included a number of responses from readers one correspondent (who does think fascism is the proper term) urged reading an Umberto Eco essay titled Ur-Fascism.  It was published by the New York Review of Books in its issue of June 22, 1995.

But in spite of this fuzziness, I think it is possible to outline a list of features that are typical of what I would like to call Ur-Fascism, or Eternal Fascism. These features cannot be organized into a system; many of them contradict each other, and are also typical of other kinds of despotism or fanaticism. But it is enough that one of them be present to allow fascism to coagulate around it.

The ensuing list of fourteen features capture Trump — as well as those who have fallen in step with him or been called out of the woodwork.  Worth reading.

Doug Bennett is Emeritus President and Professor of Politics at Earlham College. He has a wife, Ellen, and two sons, Tommy (born 1984) and Robbie (born 2003).
View all posts by Doug Bennett →
This entry was posted in Democracy and Rights, Governance, Uncategorized and tagged Fascism, James Fallows, Umberto Eco. Bookmark the permalink.