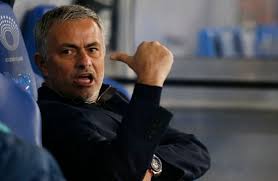 “I feel my work was betrayed,” he said. “Last season I did an amazing job and I brought players to a level that is not their level.”  That’s what Jose Mourinho, Manager of the English Premier League team Chelsea FC said about his players last week after they were defeated by hitherto lowly Leicester City last weekend.  Last year under Mourinho’s ‘leadership’ (and not, coincidentally with the riches of Chelsea’s owner, Roman Abramovich, and the extraordinary skill of his players), Chelsea won the English Premier League. This year Chelsea has a terrible record.

“I feel my work was betrayed:” with those words, Mourinho wins induction into the Annals of Leadership-Not!  Take all the credit for good things; assign all the blame to others. Those are key criteria for induction.  And be sure to cash the checks.

Doug Bennett is Emeritus President and Professor of Politics at Earlham College. He has a wife, Ellen, and two sons, Tommy (born 1984) and Robbie (born 2003).
View all posts by Doug Bennett →
This entry was posted in Leadership, Uncategorized and tagged Jose Mourinho. Bookmark the permalink.